It was a tough year here on Earth, but 2020 was a bright spot for space exploration. SpaceX sent its futuristic Starship to new heights, three countries launched Mars missions, and robots grabbed debris from the moon and an asteroid.

Next year promises more, including a planned launch of the Hubble Space Telescope’s successor.

Perhaps it’s no surprise then that space themes are having a moment in home decor. When so many of us Earthlings are stuck at home because of the pandemic, space imagery can add a sense of adventure or whimsy to rooms, walls and ceilings.

She sticks tiny glow-in-the-dark stars to the ceiling; the light can last for hours. “It’s the closest thing I’ve found to being in a planetarium,” she says. 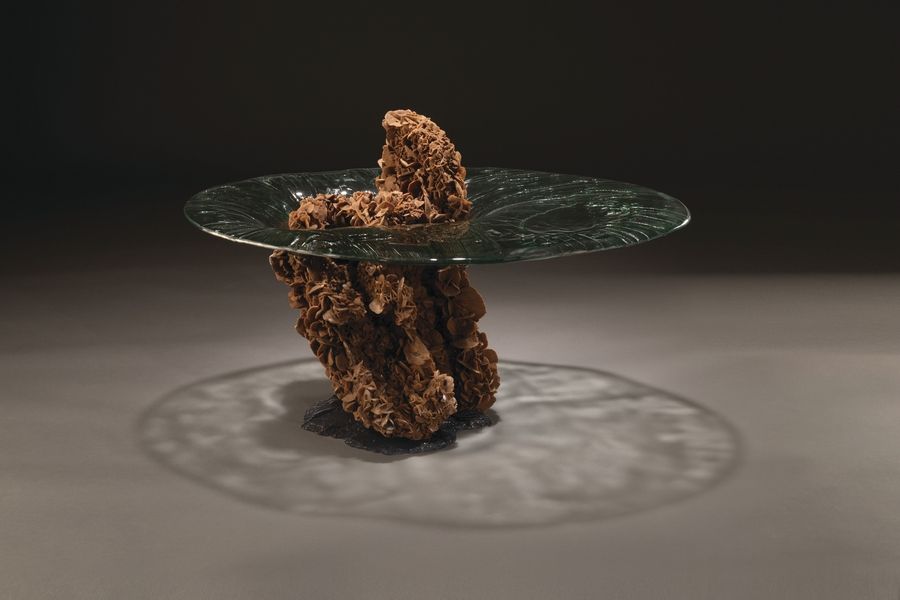 Studio Greytak, in Missoula, Montana, has designed the Impact table, where a chunk of desert rose crystals is embedded with cast glass, as if a piece of asteroid had plunged into a pool.
– David Baumstark /Courtesy of Studio Greytak

“Base your color palette around deep blue tones, then splash in bits of color like yellow, white or red,” she says.

“Or create your own galaxy wall,” she says. “Paint a blue wall, then use some watered-down white paint to splatter it with fine droplets. You may just create some new constellations.”

Outer space has inspired designers for decades. In the 1960s, the “space race” between the U.S. and the Soviet Union, along with the development of space age-y, synthetic materials, led to a surge in futuristic furniture like molded plastic chairs and Sputnik-shaped lighting. 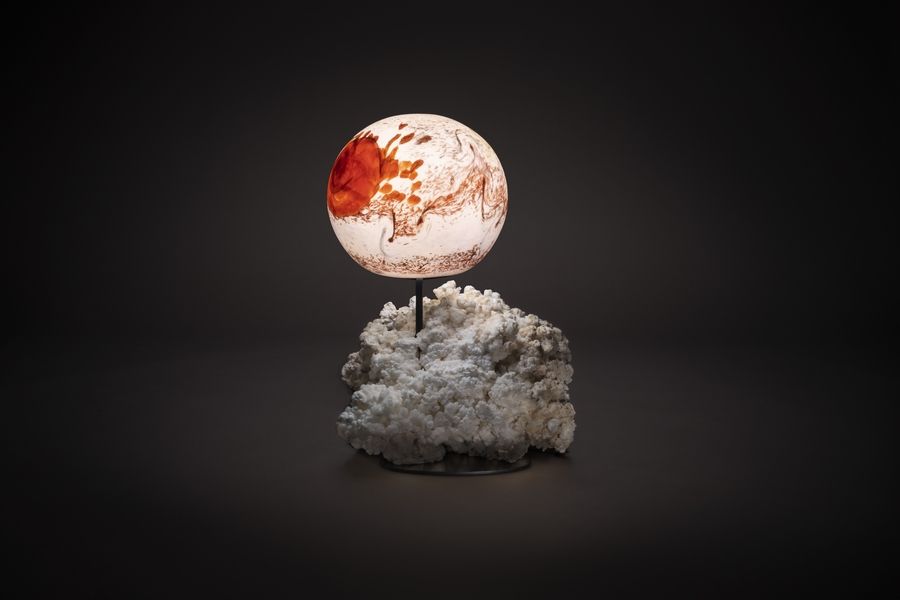 This Jupiter lamp has a base made of the mineral aragonite, depicting the whirling, turbulent gases of the planet.
– David Baumstark /Courtesy of Studio Greytak

These days, you can download artwork directly from NASA: solarsystem.nasa.gov, or find it at retailers like Red Bubble, Etsy and Zazzle.

Magana also suggests making a letter board with a space-themed quote like Neil Armstrong’s famous “One small step for man” phrase.

Much of the astronomy-themed art in the marketplace would be striking in any room. There are lunar graphics on canvas at Target. Tempaper’s got constellation wallpapers, but if you can’t do wallpaper, consider Kenna Sato Designs’ constellation decals for walls or ceilings.

Galaxy Lamps has a sphere that looks like a planetoid. Charge it up with the included USB and cycle through 16 colors with three lighting modes. There’s a moon version, too. And at Beautiful Halo, find a collection of rocket-ship ceiling fixtures. Studio Greytak, in Missoula, Montana, has designed a Jupiter lamp out of the mineral aragonite, depicting the whirling, turbulent gases of the planet. And there’s the Impact table, where a chunk of desert rose crystals is embedded with cast glass, as if a piece of asteroid had plunged into a pool.

Zodiac wall decals and a Milky Way throw rug can be found at Project Nursery. There are hanging mobiles of the planets and of stars and clouds, at both Crate & Kids and Pottery Barn Kids.

A glow-in-the-dark duvet cover printed with the solar system is also at PBK, but if you’re ready to really head to the stars, check out Snurk Living’s duvet set. The studio, owned by Dutch designers Peggy van Neer and Erik van Loo, has designed the set photoprinted with a life-size astronaut suit.

Creating a night sky on the ceiling of a home theater seems to be popular; Houzz has hundreds of examples for inspiration. Maydan Architects in Palo Alto, California, designed one for a recent project.

“Our client’s grandfather was the owner of multiple movie theaters,” says Mary Maydan. “One of them had a retractable ceiling that enabled guests to experience the starry sky at night. When our client decided to build their home theater, this installation was actually fulfilling a lifelong dream.”

The ceiling isn’t retractable, but has an eight-paneled fixture depicting the Milky Way and a shooting star.

“It provides very soft light and was intended to be kept on during the screening of the movie and create a magical experience,” says Maydan.

Best Stocks in the Past Week: Virgin Galactic, Zillow, Penn

Is there space for space in times of COVID-19?

This Hotel Chain Is Planning Your Campervan Road Trip For You

Aliens could be sucking energy from black holes. That may be how we’ll find them.