On Sunday night, two American astronauts flew to the International Space Station, the world’s only space-based laboratory, located about 400 km from the earth, in a journey that has been undertaken hundreds of times earlier. The event generated tremendous excitement around the globe, not because of any special technological achievement but because of the agency that facilitated the trip. It was the first time that astronauts used a spaceship built and launched by a private company, and the event is being widely seen as the beginning of a new era in space exploration.

Two NASA astronauts, Robert Behnken and Douglas Hurley, flew onboard a spaceship named Crew Dragon built by SpaceX, a company founded by billionaire entrepreneur Elon Musk who also heads Tesla Motors which produces new-age automobiles. The rocket, named Falcon 9, which carried the spaceship into the orbit, was also built by SpaceX. The Florida launch facility used for the flight still belonged to NASA, however, and had previously been used to launch American spaceships including the Apollo missions that took human beings to moon. The mission was called Demo-2, in keeping with the fact that it was still only a ‘test flight’, which if successful, would lead to more missions in the coming months. For NASA, it was the first flight of its astronauts on an American spaceship, launched on American soil, after nine years. NASA used to have a fleet of five spaceships under its Space Shuttle programme, that were used to make a total of 135 of journeys into space, and the International Space Station (ISS), in the 30 years between 1981 and 2011. Two of these were destroyed in accidents, the Challenger in 1986 and Columbia in 2003, each resulting in the death of seven astronauts. After the 2003 accident, in which India-born astronaut Kalpana Chawla was among those killed, the US government had decided to close the Space Shuttle programme.

The three remaining spaceships, Discovery, Atlantis, and Endeavour, were formally retired in July 2011, even though they were fit for many more flights. It was decided that it probably no longer made sense for NASA to build and operate these spaceships. It was not just costly, but was also consuming a lot of scientific resources. The transportation needs could easily be fulfilled by space vehicles that some private companies were promising to make. Accordingly, it was decided to help and support these companies in building these spaceships that can be hired by other agencies as well, and even private individuals. The NASA collaboration with SpaceX and Boeing was a result of this. SpaceX was supposed to launch two NASA astronauts aboard its Crew Dragon capsule on top of its Falcon 9 rocket to the International Space Station (ISS) on May 27. But due to the weather conditions, the space agency scrubbed the launch and has rescheduled it on May 31 (Image: NASA, SpaceX)

In the meanwhile, NASA hitched rides on Russian spaceships to travel to the ISS, for which it paid tens of millions of dollars for every trip. Russia also uses the ISS facility, and routinely sends its astronauts to the space station on its own spaceships. The new option is expected to be cheaper than that, besides offering the comfort of operating from home soil and eliminating dependence on a foreign country.

Sunday’s SpaceX flight therefore is a culmination of more than decade-long efforts to free to enable private players build and operate what essentially is a commercial taxi-service to space, and allow NASA to concentrate on deep space exploration, and work more vigorously towards taking humans to moon, and Mars, and, possibly, on some asteroid, in between. The involvement of private industry in the space sector is nothing new. World over, more and more work of space agencies is being done in collaboration with private companies. There are literally hundreds of private entities building commercial satellites for their clients. Launch services are still a somewhat restricted zone, considering that it requires elaborate facilities and deep pockets, but here too, there are several players apart from SpaceX and Boeing. Many, like Virgin Galatic of businessman Richard Branson, have been already made space flights and hope very soon to start offering passenger rides to space whoever can afford to pay. In fact, last year, a spacecraft built by Scaled Composites, a US company, even took a human being for a very short ride into space, becoming the first private spacecraft to do so.

📣 Express Explained is now on Telegram. Click here to join our channel (@ieexplained) and stay updated with the latest 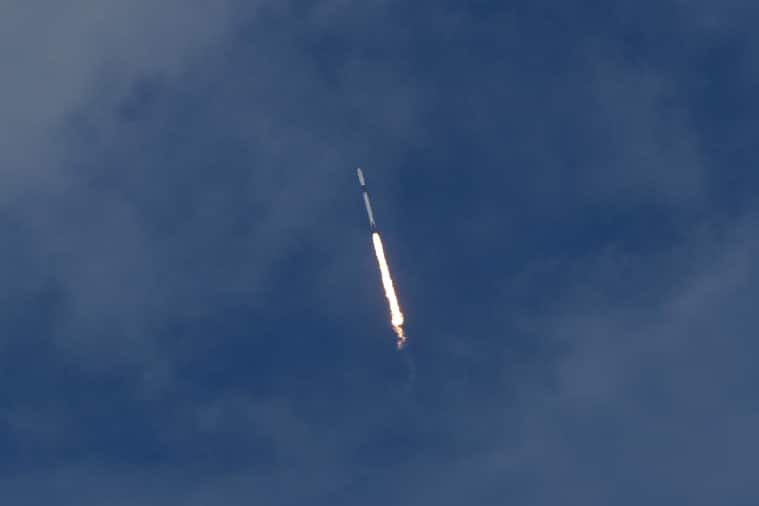 SpaceX Falcon 9 lifts off with NASA astronauts Doug Hurley and Bob Behnken in the Dragon crew capsule, Saturday, May 30, 2020 from the Kennedy Space Center at Cape Canaveral, Fla. The two astronauts are on the SpaceX test flight to the International Space Station. For the first time in nearly a decade, astronauts blasted towards orbit aboard an American rocket from American soil, a first for a private company. AP/PTI Photo

While there are a lot many private companies operating in the space sector in the United States, there is no dearth of them even in India. Most of them collaborate with the Indian Space Research Organisation (ISRO), in building and fabricating the components that go into making rockets and satellites. There are several that have started making satellites for their own use, or for their clients. However, launch services, including the building of rockets or launch vehicles to take the satellites into space, is something that is still some distance away in India right now. While ISRO has been collaborating more and more with private industry, the capability to independently carry out even routine space missions, like the ones that SpaceX or Boeing or Virgin Galactic, have been undertaking frequently now, has been missing. Window to the future

Sunday’s flight also underlines the fact that space research and exploration is now a much more collaborative enterprise than earlier. Space agencies of different countries are not just sharing data and resources, but increasingly getting together to carry out joint missions as well. The International Space Station itself is a good example of international cooperation in the space sector. The space facility is set to retire somewhere around 2028, and its replacement being planned is likely to have participation from at least ten countries, and possibly private players as well. There is also a growing realisation that space agencies need to direct their energies and resources more towards scientific research and deep space exploration. It’s been fifty years since the landing on moon, and efforts to take human beings to Mars and other celestial bodies, needs to be expedited. Getting back to the Moon, which NASA and some other agencies plan to do in the next few years, is just the first step in that direction. But that would also require huge amounts of financial resources that most of the space agencies, including NASA, are currently starved of. Private players are expected to infuse fresh investments, and also technological innovation that will benefit everyone.

NASA Request for Information on Human Health and Performance Topics

NASA Request for Information on Human Health and Performance Topics

Mars Perseverance: What you need to know about Nasa’s historic landing

Another Space SPAC Is Coming: Astra

Review: There’s not a lot going on inside ‘Chaos Walking’

Seen and unseen: The role of faith, reason in the search for alien life