The Dye House is a daring new hotel in Providence. Situated in Olneyville, it shines a light on that neglected yet vibrant part of town. And, it points up the sadly pedestrian nature of most hotels recently erected in the city. With only four rooms, the intriguing Dye House is a reminder that size does not matter, and that often small can be beautiful.

Dye House is the result of the inspired vision of Everett Abitbol of Deacon Hospitality Group and Shannon Maldonado of the lifestyle brand Yowie (their other hotel, The Deacon, occupies a Victorian church in Philadelphia). Before its current conversion, Olneyville’s new boutique hotel housed a variety of creative businesses, including furniture, architecture, and ceramics studios.

In fact, ceramicist J Schatz hired Christine West of Kite Architects to get the building up to code and to complete a renovation begun a few years earlier by AD Studio. Abitbol was taken with space when purchasing one of J Schatz’s mobile bird feeders, and he returned later to buy the building.

The long low 141-year-old building is reflective of Olneyville’s once-booming industries–locomotives, rubber, steel, and wool. Dye House was one of many buildings of the Weybosset Mill complex. Dominated by the American Woolen Company (which operated three score mills across the region), Olneyville became one of America’s leading manufacturers of worsted wool. But as happened throughout New England, the local mills closed during the Depression.

Mill buildings behind the Dye House. PHOTO: Will Morgan

Those people who venture to Olneyville–to get Wes’ ribs, New York System Wieners, a croissant at Butterbang, or a cocktail at Justine’s–probably do not linger in the buzzing multi-lingual commercial center along Westminster and Plainfield Streets. But linger and explore: Go a block or so south to the area around the Dye House and there is a dramatic collection of mill architecture. The nearby Atlantic Mills, the US Rubber Lofts, the American Locomotive Company, and other mills have already been adaptively revamped as businesses and apartments. The Steel Yard, Gotham Greens, and the Box Office are also part of the larger revival of Olneyville, a neighborhood that is livelier than the lifeless, corporate, and embarrassingly misnamed Innovation District. 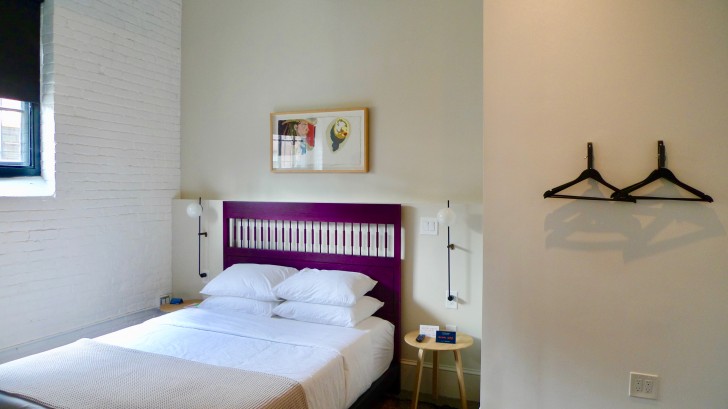 Room at the Dye House. PHOTO Will Morgan

While it would be churlish to compare the Dye House with Homewood Suites or the Aloft downtown, the Olneyville hotel is somewhere you would actually be thrilled to stay. Unlike any spirit-numbing chain offering, Dye House is the kind of romantic hotel that one would love to discover in a small village in, say, France or Wales. The brick walls and the full-length glazed monitor ooze an old-world charm, while serving as a tribute to a Yankee industrial aesthetic. 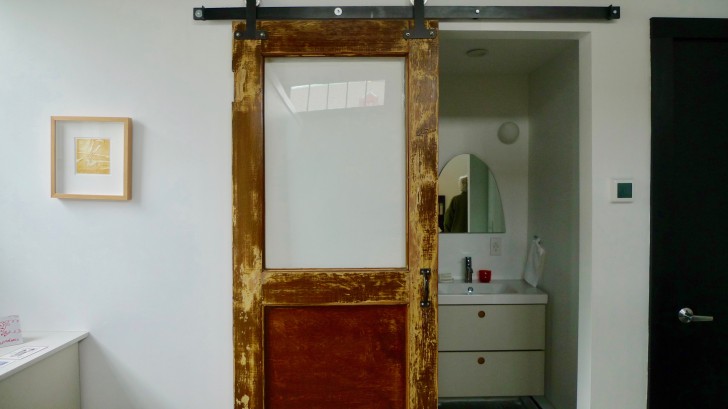 The four guest rooms, carrying such wooly names as Weft, and Twill, are stylishly minimal, with exposed brick walls, a white color scheme, and straightforward, smartly styled furniture. Expressing Abitbol’s belief in Olneyville, much of the furniture and all of the paintings, fabrics, and ceramics was made by local designers, many of them RISD graduates. 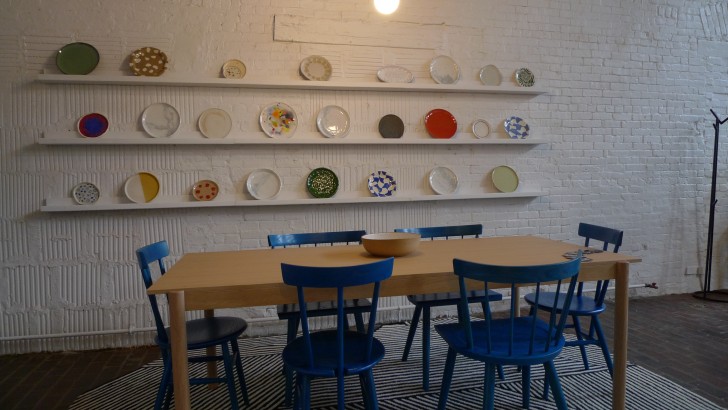 The Loft is a large guest room suitable for entertaining (it is also called the Culinary Suite). It is has a full kitchen with a six-burner gas stove and room for a dozen or more diners. Outside is a small garden, which will soon boast a pizza oven. 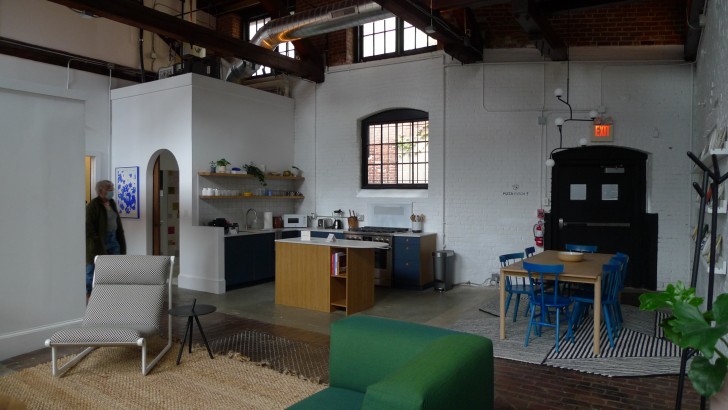 The Loft. PHOTO: Will Morgan

The main dye room, now called the Studio, is a small playing field size open space, bathed in natural light from its monitor windows It is a blank canvas for any kind of event: the Dye House may be rented for weddings, receptions, dinners, Bar Mitzvahs, lectures, concerts, workshops, or a photography studio, any of which will bring life to this surprising corner of Providence. 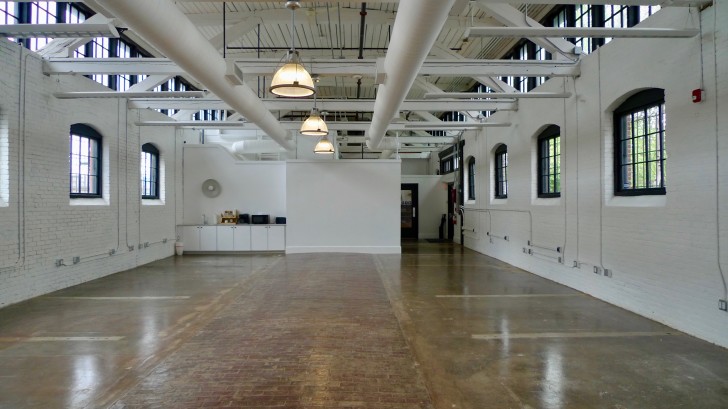 The Studio. PHOTO: Will Morgan

A lot is happening in the neighborhood (the conversion of 25 Bough Street as a community center and the construction of a new medical building, for example). One of the most promising is that the Dye House will be at the western approach of a bike path. There will be a pedestrian/bicycle bridge over the 6/10 Connector, linking the Armory District with Olneyville. Bridging the likes of a Berlin Wall of destructive highway planning is only part of the hope that a project like the Dye House brings to the city. The hotel has a free bike program for guests, and bike racks in the shape of the hotel’s lamb logo were fabricated at the Steel Yard. 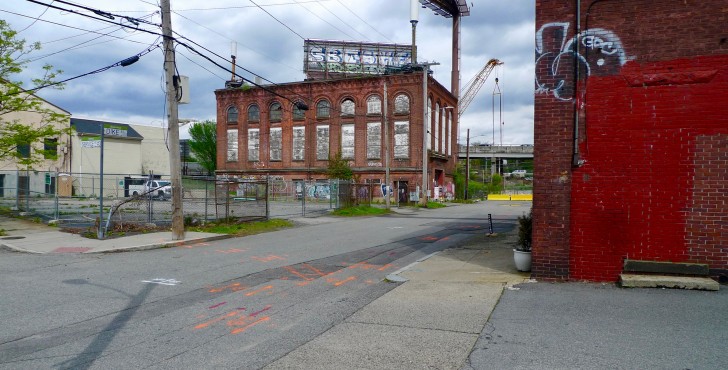 Dye House is one demonstration of how creative energy is transforming parts of Providence. Rather than large-scale business and government projects, such as the broken promise of the I-195 redevelopment, it may be better to develop incrementally. When we entrust development to fearless visionaries such as Everett Abitbol, we increase our chances for success.

GoLocal architecture critic William Morgan has been written about design and cities for a variety of newspapers including the New York Times, the Cleveland Plain Dealer, and the Christian Science Monitor.

Wine that orbited Earth sampled by tasters in France

What happens to the creatures of spaceflight

Nuclear rockets to Mars are dangerous and unnecessary