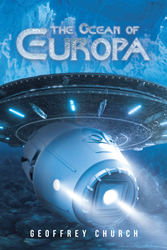 Geoffrey Church, a native of Cleveland, Ohio, currently residing in Los Angeles, California, and a supporter of the space program and the commercialization of space exploration who received his bachelor’s degree at Cleveland State University and his master’s degree in political science at California State University, has completed his new book “Europa the Ocean Moon”: a vivid and engrossing tale about how the recently retired U.S. president plans to secure his legacy on Europa.

Geoffrey writes, “Drysdale envisioned his library as being much more than just another traditional presidential library. He imagined a vast scientific research facility along with an immense aquarium that could be used to study and observe life-forms from the ocean below. This would be his legacy to the world, a major scientific facility that would not only house his presidential records and archives but also a major center to facilitate space tourism and scientific discovery and research. This would be his lasting monumental achievement and legacy to the world, and he intended on funding the project entirely from his own vast personal fortune. Thank God I cut taxes as much as I did! he thought. Or else he would never have had the resources to embark on such a vast and monumental undertaking. Drysdale also firmly believed that the private sector and industry were essential to space exploration and development.”

Published by Page Publishing, Geoffrey Church’s absorbing tale details the preparation and execution of the former United States president’s plan to fortify his legacy. This second installment of the Europa Chronicles begins with the former president of the United States planning to create his presidential library on Europa. This has never been done before and will establish the president in the history books. In order for this plan to be completed, the president must travel to oversee his creation.

Before travelling, he convinces a renowned space architect named Andrew Chen. Andrew has been given the task to create an extraordinary structure which will eventually become the greatest attraction and scientific research center in the entire solar system. Readers will follow along the presidential mission and feel transported into an astounding new world.

Readers who wish to experience this breathtaking work can purchase “Europa the Ocean Moon” at bookstores everywhere, or online at the Apple iTunes Store, Amazon, Google Play, or Barnes and Noble.

For additional information or media inquiries, contact Page Publishing at 866-315-2708.

Page Publishing is a traditional, full-service publishing house that handles all the intricacies involved in publishing its authors’ books, including distribution in the world’s largest retail outlets and royalty generation. Page Publishing knows that authors need to be free to create, not mired in logistics like eBook conversion, establishing wholesale accounts, insurance, shipping, taxes, and so on. Page’s accomplished writers and publishing professionals allow authors to leave behind these complex and time-consuming issues and focus on their passion: writing and creating. Learn more at http://www.pagepublishing.com.

The revival of the suborbital market

What does finding water on the Moon mean?; ITV News

Another Team of Astronauts to Head to Space Station this Spring

OLD NEWS: Tourism was so much harder back then

Our Opposition Grows: Dangers of Launching Nukes Into Space

How to Watch Chronologically or by Release Date